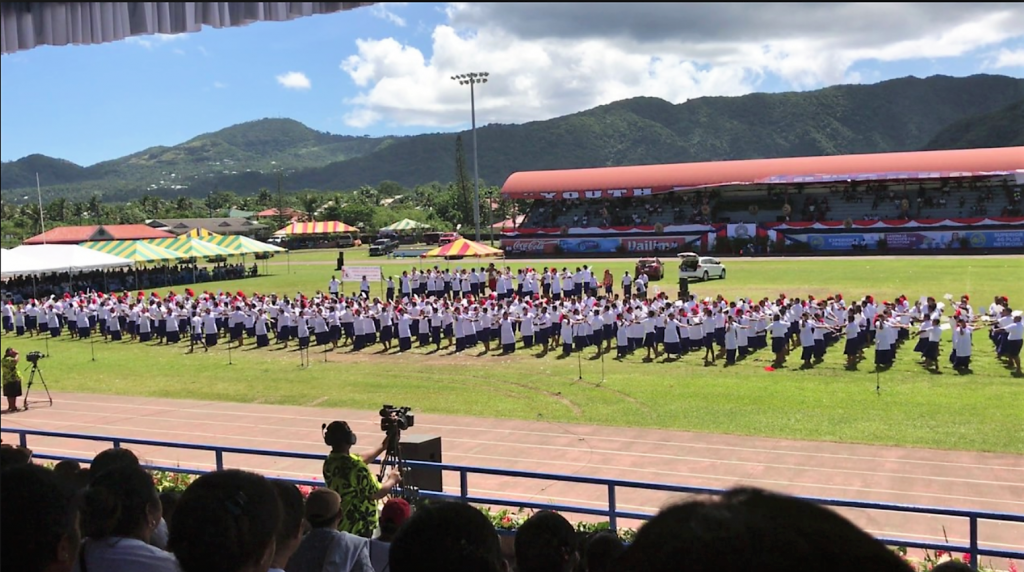 Flag Day is celebrated in commemoration of the American Flag being raised for the first time above the islands of American Samoa on April 17, 1900. At the time, it was a declaration of the United States of America’s ownership and protection. Today, it is a celebration of the union of America and fa’a Samoa (traditional Samoan way of life).

Throughout the 19th century, Great Britain, Germany and the US tried to divide the Samoan Islands between themselves. In 1899, they drew the lines; the US claimed the eastern islands and everything west belonged to Germany. By 1904, the secession of the islands was complete, with the local matai (chiefs) of Manu’a signing the deed of cession at last. The US government finally officially recognize it in 1929.

The US Navy administered over Samoan government affairs for the first 50+ years. In 1951, when control transferred to the Department of the Interior, through federally appointed governors. Due to local pressures, 1977 found American Samoa with the first locally elected Samoan governor. Since then, all governors and Fono (Senate and House of Representative) members have been locally elected or appointed.

Before the Europeans came, Samoa had no flags. With its new territorial status, American Samoa adopted the US flag. Then on Flag Day, in 1960, the American Samoan flag became the official flag for the islands. The design bears both US and Samoan influences. The US symbols influenced the bald eagle and the red, white, and blue. Fa’a Samoa contributed the fue (fly wisk) and uatogi (war club).

Today, the people of American Samoa enjoy the status of being US nationals, but not US citizens; they are able to travel, live, and work anywhere in the US but are unable to vote or assume the full rights, privileges, and responsibilities of US citizens. They are the only US territory without natural citizenship.

This is largely due to the traditions of matai (chief) law and aiga (family), or communal, land. They’ve largely been able to keep their fa’a Samoa, while enjoying the protection and aid of the US government. In return, the US maintains military presence, with the American Samoa Army Recruiting Station ranking #1 worldwide.

There’s ongoing debate over this matter as some American Samoans believe they have the right to full citizenship, while others worry it would disrupt their traditions too drastically.

Today, Flag Day is a multi-day celebration. On the main island of Tutuila, efforts to beautify and decorate in preparation for this special holiday are visible all over. For weeks before, crews move from one bus stop to the next, and from lamppost to retaining wall, touching up paint and overall aesthetics of the island. During the week before, government employees weave/braid palm fronds and flowers around street signs, lampposts, and coconut trees.

It’s one of my favorite Samoan traditions and I have to learn how while we’re here!

Every school and church group practices Siva (traditional Samoan dance) to tell the stories of the islands. Public performances run for nights leading up to Flag Day.

The morning of brings the fautasi (long boat) races. Rain or shine, fautasi excites cheering crowds, rarely seen on this quiet, tropical island. The strongest and fittest teenage boys and men from the villages compete for that year’s victor title.

The morning of Flag Day brings people from all over the island to Veteran’s Memorial Stadium for the Flag Day parade. Most government officials and employees participate in the celebration. The parade begins with a prayer, as with all things on the island.  Next, comes the raising of the flags, both the US and American Samoan. After that, the US National Anthem and “Amerika Samoa” (American Samoa anthem) are sung.

Each government department and agency, as well as churches, schools, villages, and sports teams, take their turn parading around the stadium. The program wraps up with more Siva Samoa, performed by local school groups.

The rest of the day is spent in company of friends and family. People participate in informal sports competitions or relax at the beach. Families prepare and then, indulge in umu (Samoan BBQ).

How We Celebrated Flag Day

A couple weeks ago, the kids and I celebrated American Samoa with another homeschooling family, with what we called Samoan Day. We ate panikeke (delicious fried, banana pancake balls). The kids learned about traditional Samoan tatau symbols and got to make their own designs.

Then they made paper boats and had their own “fautasi” races.

The actual Flag Day was rainy, but our family spent it at a new beach (Nua), enjoying the natural beauty of the island. Just when I think we’ve been to every beach on the island, we stumble across a new one.

All the days and weeks of preparation were rewarded with pride in this rare US gem. The tropical beauty and traditions radiate through the spirit, friendliness, and hard work of the people of American Samoa. May I take this opportunity to express my gratitude to the people of American Samoa for welcoming us and sharing your stunning island with us!