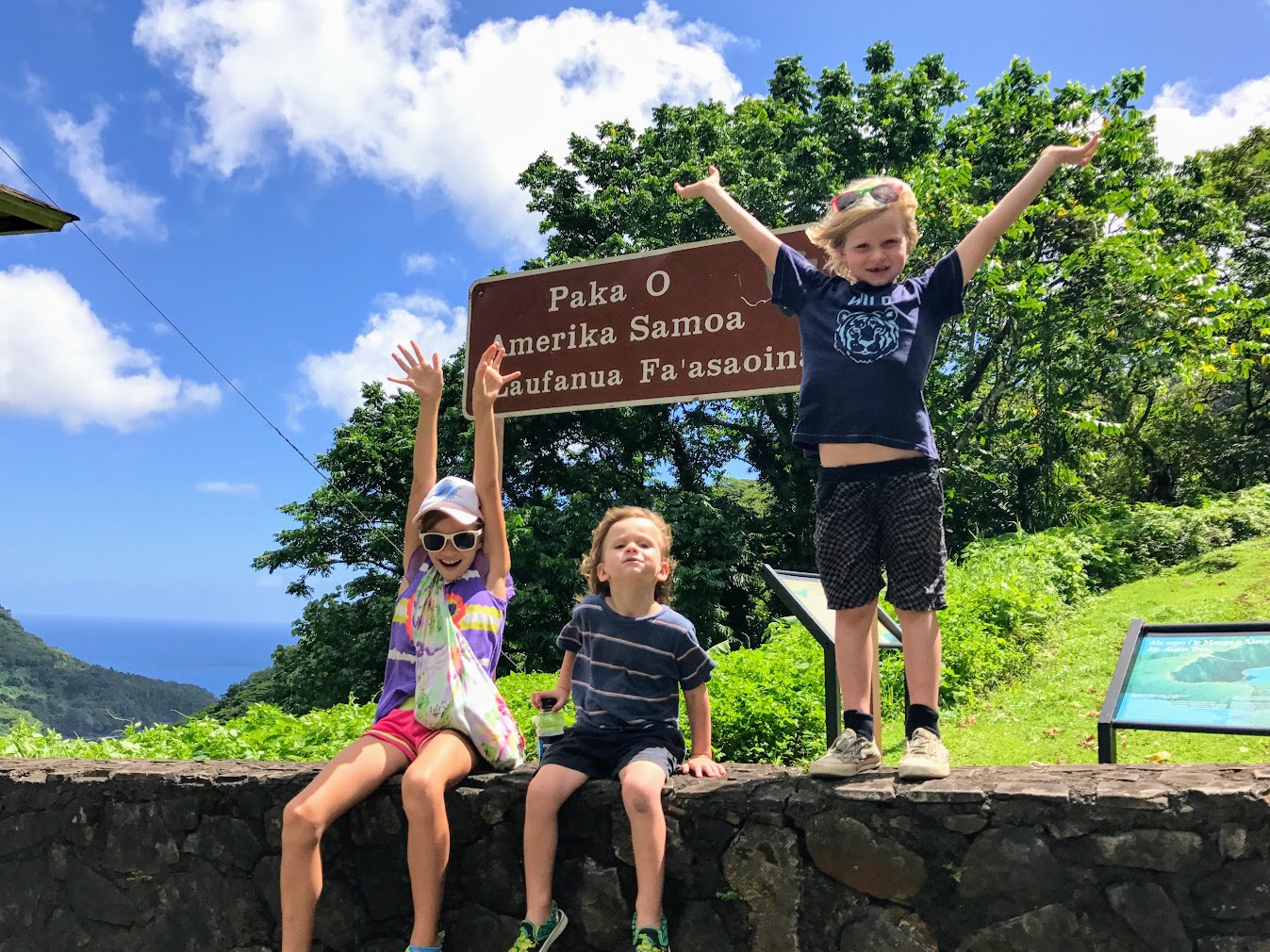 The National Park of American Samoa is spread across three islands, covering 9 acres of land and 4,500 acres of coral reef and ocean. Tutuila (the main island) is the only part of the park accessible by car and consequently, the most visited. The rest of the park is on Ta’u and Ofu, part of the Manu’a Isalnds, accessible by plane or boat from Tutuila.

As the only US National Park south of the equator, it’s truly one of a kind.

The National Park of American Samoa is Free!

With National Park Week here, most US National Parks offer free entrance days. The NP of American Samoa offers free entrance 365 days/year! There are never any fees for using the park and it’s open to any and all who make the journey to see it.

There Are No Crowds

American Samoa is just difficult and expensive enough to get to that there aren’t hoards of tourists overtaking the islands. The local culture is still very much alive and apparent to the occasional visitor. Most local men where traditional i’e lava lavas and women wear puletasi dresses. Cruise ships come in a couple times a month and you’ll get a momentary jump in tourist activity, but they tend to stay close the the harbor. The locals are busy living their lives and usually only head to the beaches in the evening times and rarely assume the challenges of the hiking trails. They are very helpful in directing you in the right direction, though!

Hiking in the National Park of American Samoa

With hikes of all difficulty levels, there’s something for everyone. The hikes are spread throughout the park, some tracing the tops of the mountain ridges and some follow the coastlines. Some of the easier hikes are Pola Island Trail and Blunt’s Point Trail; both are under a mile round-trip and have informational markers along the way. The WWII Heritage Trail is a moderate hike. A continuation of Blunt’s Point Trail, it has WWII gun installations for those interested in history and a few ladders with ropes at the end to traverse the steeper descent. Mt. Alava Adventure trail is not for the faint-of-heart. It features 783 steps and 56 ladders; it can challenge even seasoned hikers. Some of the trail-heads can be tricky to find, but the locals are super friendly and always willing to point you in the right direction.

The National Park on Manu’a provides even more hiking options for those adventurous souls willing to make the extra trip. Si’u Point Trail, on Ta’u, takes you past the historical Saua Site and to the sea cliffs on the south side of the island. Ofu Island offers the challenging Tumu Mountain Trail. Not actually part of the park, but the trail is maintain by the rangers and overlooks all three islands, Ofu Beach, and the barrier reef. Oge Beach Trail is on Olosega, following the shoreline to Maga Point where boobies and frigate birds nest.

Beaches in the National Park of American Samoa

All three islands that are home to the park are quite small, the biggest being Tutuila, which is only 55 sq miles, but it’s long and narrow layout leaves enough beach to keep you busy (or relaxing). The beaches vary from pebble beaches in Vatia to soft, sand beaches in Fagasa and on Ofu. Since there are no crowds, you can always find PLENTY of space to spread out and let the kids run and explore. There have been recent initiatives on Tutuila to discourage littering and encourage proper disposal of garbage, but we always try to bring a garbage bag to do our part in cleaning up the beaches that we visit.

The islands of American Samoa are all bursting with tropical rain-forests. Tutuila alone gets an average of 200 inches of rain/year, keeping the islands brilliantly green year-round. Hiking through the rain-forest feels like you’ve entered another world, with moss growing on everything and leaves as big as umbrellas. There are no known poisonous plants on the islands, but there are some that can leave you feeling itchy until washed off. Ask around. Again, Samoans are super nice and helpful.

Due to its remote location, American Samoa has relatively small variance in fauna. The only native mammals are bats, or rather, flying foxes. You can see them most active at dawn and dusk. There are also birds, toads, and lizards. The birds are exotic and beautiful and the lizards are man’s best friend here! There are lots of the mosquitoes, but the lizards do their best to keep those pests under control. Also, be aware of centipedes that are poisonous, but rarely deadly (living here for almost a year, I have yet to see a centipede, but I’m told they are around). Hadley did a great job describing the animals on her blog, Hadley’s Life.

As I mentioned in the beginning, 4,500 acres of the park are ocean and coral reef. There are over 950 species of fish and 250 of coral. Throughout September and October, you can see the air spouts and breaching of humpback whales as they make their annual migration. From a water craft (boat, canoe, SUP, etc) you’re sure to see turtles, curious to know what is floating above their watery home. And slap on a mask and snorkel to enter the magical under-water world, where you’ll see colorful, sometimes alien-looking, schools of fish and sea-life. You might even run into a gentle reef shark or ray. Please, be aware of sea urchins and rockfish, both have toxic spines that, though not usually life-threatening, may need medical attention.

I have been so impressed with our rangers here. They’re always patient with my rambunctious kids. They’re knowledgeable about the islands of American Samoa, not just the park lands. They offer guided hikes, where they offer so much more historical and geological information. Plus, they are genuine; they’re genuinely interested in our story, in our kids, and in getting to know us. Now that I think about it, that might just be Samoans in general.

I can’t say enough about the views from the National Park! Because of the dense rain-forest, much of the hiking is similar to being in a green tunnel, but when the trees open up, the views are breath-taking! You can catch glimpses of villages down below, smaller neighboring islands, an endless expanse of ocean, and even those fascinating whales breaching off shore. I’ll let the pictures tell the rest of the story…

I haven’t been to all of the US National Parks, but I can tell you that the National Park of American Samoa is my favorite so far. The scenery, wildlife, people, and adventures all combine to create something beautiful and unique. If you ever get the chance to visit the South Pacific, make sure to schedule enough time to explore this tropical, wild wonderland.

What is your favorite National Park that you’ve visited? Tell us what was special about it.