A New Life in American Samoa 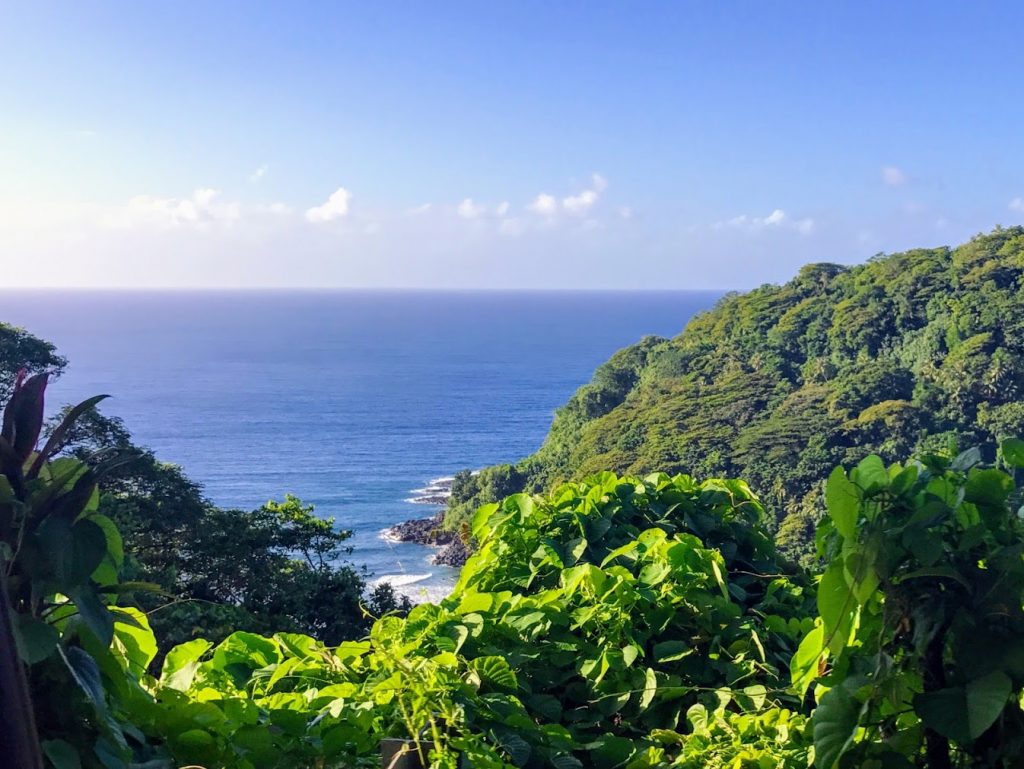 On June 14, 2017, Nate’s plane landed in American Samoa. Three weeks later the kids and I joined him. And so, began our new adventure in the South Pacific. This past year has been one of growth and learning, adventure and relaxation, frustration and fascination, sorrow and joy. Every family has a unique experience living here, this is ours:

We’ve spent the last few years minimizing our possessions and time commitments, in exchange for more quality time and experiences. This took on a whole new meaning as we packed everything we owned into just a few suitcases and moved to American Samoa. We’ve been living with less than ever: Minimal kitchen supplies, very minimal furniture, and just a couple fish posters on our walls. As I home-schooled the kids this past year, we kept a loose schedule, which was always flexible enough to drop everything and head out for a hike or beach day. We maintain a family first policy for every Saturday and Sunday (with the exception of Nate having to work 24/7 for the month following Cyclone Gita). And I’ve got to tell you, we’ve loved it! We’ve been so spoiled here with the lack of clutter or commitments; I hope it never changes.

New Sight for “Save Our Oceans”

I’ve never paid much attention to the environmentalists crying about our earth; I was perfectly happy in my ignorant little bubble of naïveté. That came to an abrupt end after we moved to the island. The amount of garbage that washes up onto shore and the rest that no one sees unless their snorkeling is appalling! I’ve been sick to my stomach after some trips to the beach, when we’ve had to wade through trash to get to the pretty shoreline. We’ve begun instituting pretty severe bans on plastic use and wastefulness within our family.

New Understanding of Heat and Humidity

After just a few days on the island, I realized that I hadn’t ever known what humidity meant. Supposedly, there are two seasons here- Summer and Winter or the Dry Season and the Wet Season, but all I’ve experienced is hot and humid. Mold, rust, and decay rule all! We’ve heard that it’s not so bad in houses with a/c, but we made the decision to go a/c free, so that one’s on us. On the plus side, we’ve actually had a few nights recently that got cool enough to turn the fan off and cover up with a lava lava; I’m talking 72° F. Brrr

I love the people of American Samoa, but on the road, they can be the kindest and most infuriating drivers! The top speed limit on the island is 25, but there are certain drivers that take that mean 15. You see a gobs of 4-wheel drive trucks and SUV’s that insist on slowing down to go over the endless potholes in the roads, driving at a pace even a snail would roll it’s eyes at. And don’t get me started on merging into traffic. Okay, I’ll tell you… The nice ones will stop in the middle of busy traffic to let cars in. The inconsiderate ones will jump out in front of you and then proceed to drive 10 mph, or if you stop to let one car in, the next ten will push their way out as well.

I really miss having a wide variety of fresh fruits and vegetables. You can find certain imported produce, but it’s usually far overpriced and often spoiled by the time it reaches the store shelves. There’s something to be said for the conservation of resources and I appreciate the fact that tons of fuel isn’t being burned through, just so we can have our fresh berries and kale, but I do still miss them. The one thing that makes it bearable, is that during the right seasons, we have access to incredibly fresh tropical fruits.

Moving to the other side of the world, can be lonely. So, we have relied on the kindness and friendship of strangers. We’ve found common interests with people from different countries and from all walks of life. But people also have different prioritize and time constraints. This has sometimes left us to feeling the ache of loneliness, missing the close friends we left behind.

I remember the days of complaining that we were only allowed three devices on our Netflix account and having our internet company bump us up to the next data package because we were exceeding the allotted amount. Haha We canceled Netflix a month after arriving in American Samoa because the shows loaded too slowly and the data costs weren’t fitting into our new minimalist budget. Luckily, two new cables have arrived on island and we’re seeing the internet speeds beginning to increase. But no, we will not be resubscribing to Netflix, we’ve loved spending our time doing other things.

New Views of Hills and Valleys

We’ve experienced new landscapes literally and figuratively. Literally, we wake up, look out our bedroom window, and see the waves crashing onto shore. We drive half an hour and see some of the world’s most breathtaking views. We’ve never lived in a place quite as picturesque as this. We’ve also experienced new landscapes figuratively. Our life on the island has had higher highs and lower lows than our “normal” life on the mainland. We’ve missed some things like crazy and felt desperately discouraged about others. On the other hand, there’s little that compares to the high of tackling an eight mile hike, in South Pacific heat and rainstorms, single-handedly, with your three young kids in tow, reaching the peak. When you know that you are in the right place, doing the right thing, giving your kids these experiences!

Over the past year, I have made it my personal mission to not avoid anything out of fear. I’ve climbed heights that made my legs shake and my heart race. I’ve gone snorkeling with the goal of finding a shark and conquering that fear (I still haven’t seen one, but I will!). Last year, we took on the challenge of home-schooling our kids, which was scary and a little crazy, but successful. And I had a big lesson in having a healthy and respectful relationship with the ocean just a few weeks after arriving, when Holden and I were pulled out into the deep ocean in a rip current with no flotation devices or snorkel gear to get us safely back to shore.

I appreciate our family back in the States for still loving us and not telling us we’re crazy when we moved their grand-kids and niece and nephews so far away. I appreciate their patience and understanding as we commenced on our adventure, not knowing when we’d be reunited. Our little family, here in American Samoa, has grown closer than before. Yes, we still have our bad days and our disagreements, but now we depend upon each other completely. We have adventures together, we make plans together, and we dream together. Every decision we make comes down to, “What’s best for our family, as a whole?”

With one year under our belts, we look forward to the future. We don’t know how much longer we’ll be living on this lush, tropical island. So we keep exploring and enjoying it as much as we can, for as long as we can. We’re also keeping an eye on that globe, spinning it until we find our next place to call home. If you’ve ever wanted to live somewhere new or if you’ve felt jealousy as you look through my Instagram, you should consider looking into American Samoa. Especially for Americans, the process is fairly simple and new contract employees are always needed. Comment below or email me personally if your looking for more info.

What are some things you still want to know about life in American Samoa or overseas in general?

Also, if you had the freedom to live anywhere in the world, where would you choose? And why?

5 thoughts on “A New Life in American Samoa”